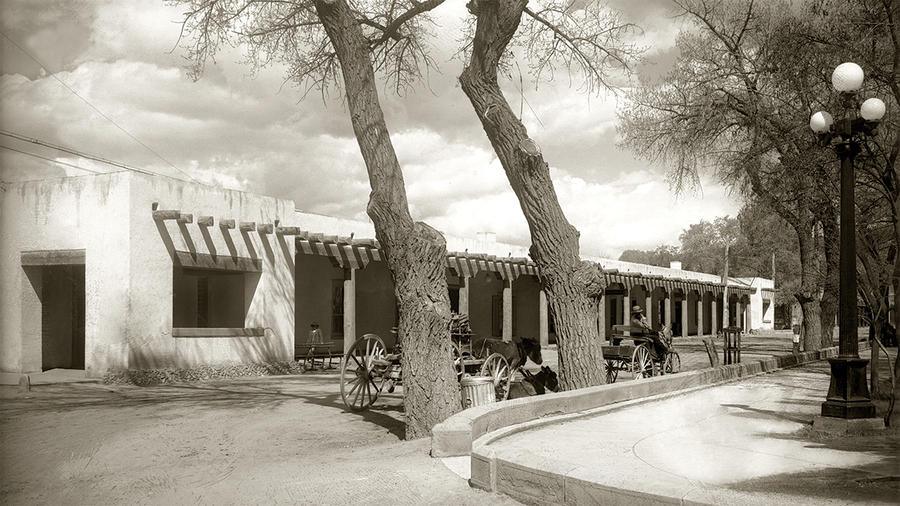 Palace of the Governors. Photo by T. Harmon Parkhurst

The Palace of the Governors

Situated on the north side of the historic Santa Fe Plaza, the Palace of the Governors is a beloved icon, complex symbol, and anchor for the New Mexico History Museum.

Dating back to 1610, the Palace is the oldest public building in continuous use constructed by European settlers in the continental United States. Built by the Spanish for colonial administration, the structure has been extensively modified over the centuries to meet changing needs and stylistic interests. In addition to Spanish colonial life, the Palace has associations with the Pueblo Revolt (1680–1692), a brief period of Mexican rule (1821–1848), settlement as an American territory (1848–1912), and statehood for New Mexico (1912–present).

In 1909 the building was designated as the home for the Museum of New Mexico. To reinforce its connections with earlier cultures the building was renovated using features drawn from local building traditions. The resulting Spanish-Pueblo Revival style helped influence the architectural character of Santa Fe and much of the state. With a few minor changes, this is the Palace of the Governors we see today.

In recognition of its historical and architectural significance, this modest one-story adobe structure has been designated a National Historic Landmark. In 2015 it was also recognized as a National Treasure by the National Trust for Historic Preservation.

For many visitors to Santa Fe, the Palace is best known for its block-long portal where Native American artisans sell handmade jewelry and other crafts. Behind the adobe walls, visitors can find interpretive galleries, the Palace Press, and a large courtyard that connects with the rest of the museum campus. Although work has been done to improve heating and cooling, lighting, and visitor access, care has been taken to maintain the building’s historic character.

Except for special occasions, access to the Palace is through the Lincoln Street entrance to the New Mexico History Museum.