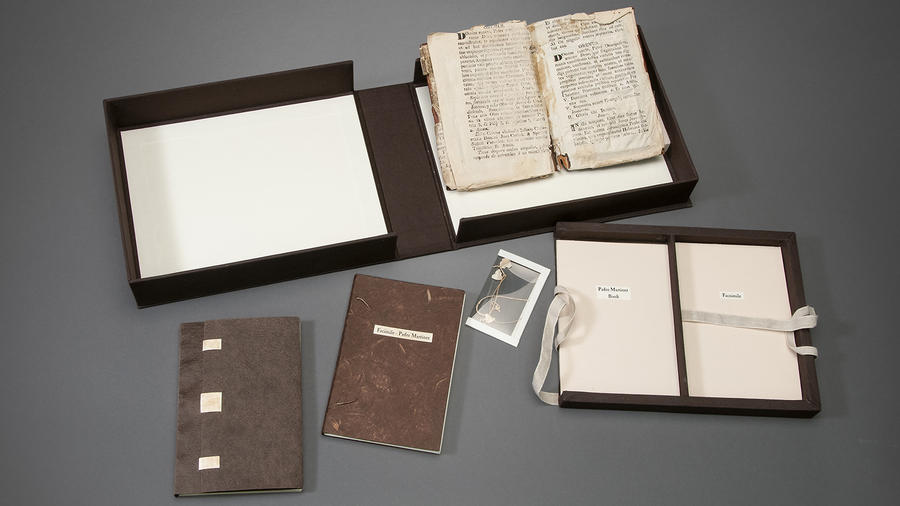 This "Manualito de parrocos : para los auto del ministerio mas precisos, y auxiliar á los enfermos" is a manual of prayers and rituals for parish priests, originally published in Mexico in 1731 by Jesuit priest Juan Francisco Lopez. Padre Martinez's printing was based on a later edition, and he advertised this book, along with nine other titles, in 1839.

Born in Abiquiú, New Mexico, Padre Antonio José Martínez studied for the priesthood in Durango, Mexico, and was entrusted with the curacy of Taos in 1826. He was one of the most influential figures of 19th century New Mexico. Politically active, he was a champion of the poor and a pioneer in the field of education. He was responsible for producing the first printed books in the territory during the volatile period of transition from Mexican to American rule.

Padre Martínez acquired New Mexico's first press in 1836, within a year of its arrival in Santa Fe, and moved it to Taos. Under his direction, printer Jesús María Baca produced Spanish language material. For a little more than a decade the press poured out primers for use in the Martínez schools, along with religious tracts and political and autobiographical works penned by the priest.

In 1844 Martínez loaned his press to officials in Santa Fe for the printing of government documents. Though the press was back in Taos by 1847, Padre Martínez appeared to have lost his vigor for the business of publishing. The press fell into other hands before his death in 1867.