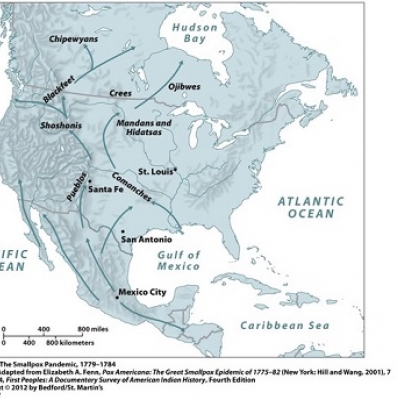 The talk will trace the spread of the great smallpox epidemic that broke out in Mexico in 1779, traveled north to New Mexico, was transmitted from tribe to tribe across the American West, and reached eastern Canada by 1784. We will discuss its impact on Indian country and the multiple Native American communities it struck, and consider its significance for understanding the subsequent history of the United States.

Colin Calloway grew up in England and received his Ph.D. from the University of Leeds. In the US, he has worked at the Center for the History of the American Indian at the Newberry Library in Chicago, and taught at the University of Wyoming and Dartmouth College. He has published more than a dozen books, including One Vast Winter Count: The Native American West Before Lewis and Clark, which won six best book awards, and most recently The Indian World of George Washington, which was a National Book Award finalist and won the George Washington Prize. He has been President of the American Society for Ethnohistory and received the Western History Association’s American Indian History Lifetime Achievement Award.