The Valles Caldera, Then, Now, and to Come 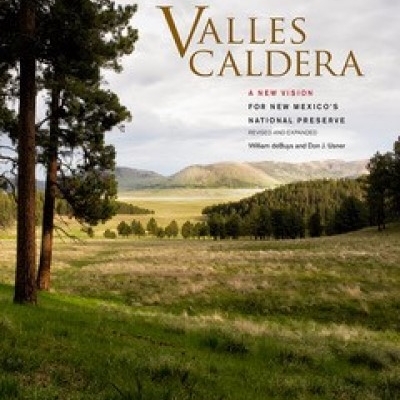 This talk is drawn from the new, revised and expanded edition of Valles Caldera, A New Vision for New Mexico’s National Preserve, by William deBuys and Don J. Usner, Museum of New Mexico Press, 2021.

Usner and deBuys will present a photo-talk on the Valles Caldera National Preserve highlighting the main events, political and ecological issues, of the first twenty years of the preserve and its prospect for the next twenty. Usner will show some of the photographs he captured for the revised and expanded edition of the book, which first appeared in 2006, including a selection documenting the effects of the Las Conchas and Thompson Ridge fires.

William deBuys chaired the Valles Caldera Trust from 2001 to 2005 in its early efforts to manage the 89,000-acre Valles Caldera National Preserve in north-central New Mexico.  He is the author of ten books, including A Great Aridness: Climate Change and the Future of the American Southwest (2011) and River of Traps (a 1991 Pulitzer finalist). His most recent book, The Trail to Kanjiroba: Rediscovering Earth in an Age of Loss, appeared in August 2021. Bill lives on a farm he has tended since 1976 in northern New Mexico.

Don J. Usner was born and raised in Los Alamos and Chimayó, New Mexico. He is an award winning writer and photographer and former official photographer for the Valles Caldera Trust. His books include Orale! Lowrider: Custom Made in New Mexico; Benigna’s Chimayó: Cuentos from the Old Plaza; Sabino’s Map: Life in Chimayó’s Old Plaza and Chasing Dichos Through Chimayó. He lives in Santa Fe.